House of Cards and Alice Neel 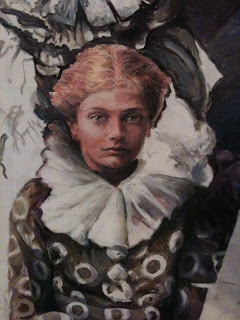 I have been working nonstop on the painting called House of Cards. The pace slow because the painting is complicated: 6 figures, 2 patterned dresses, and a stack of cards that sometimes makes me regret that I have always wanted to include them in a painting or two. I have a blank bohemouth 6' x 6' stretched canvas in my entry hall that was meant for this subject, and it may stay there awhile. I am not even sure I can get the canvas into my studio.


I saw a documentary film about Alice Neel several years ago. One of the things that struck me about her house is that there were stacks of paintings everywhere: in every room, hallway, and stairwell. Alice Neel said that "you should keep on painting no matter how difficult it is, because this is all part of experience, and the more experience you have, the better it is .....unless it kills you, and then you know you have gone too far.

If the idea of a house of cards intrigues you at all, check out the movie by the same name (1992).
Kathleen Turner stars as Ruth, the mother of two children. When her husband dies in an accident while the family is in Mexico, the six year old daughter Sally retreats into autism. A specialist in childhood autism attempts to bring Sally back from her mental isolation through traditional psychotherapy. In contrast, Ruth risks her own sanity as she attempts to enter her daughter's world. As she copes with Sally's bizarre behavior, she builds a wonderful, gravity-defying house of cards.
Posted by AskewArt at 6:34 PM No comments: